“This can never happen again,” Josie intoned with an insistence bordering on an ultimatum. Turning to the other lay members of the leadership council of Ascension Lutheran Church, Josie reiterated her point with the words “never again.” There are a number of grave situations that a phrase like this could precede or follow in a church leadership meeting and none are the kinds of things most of us want to consider. We hear this phrase uttered when something previously unconsidered becomes a recent and regrettable experience.  “This can never happen again,” we insist when our worldview is shaken by what has just passed.

But on this particular day, Josie and the other leaders at Ascension were saying, “this can never happen again” because one of our formerly homeless brothers had been locked out of the service when he had shown up late and ushers had failed to notice him. Waiting patiently at the door, he was admitted with a dollar in his hand for the offering as the congregation was returning to the waiting world and the leadership council began their monthly meeting. Though once they had uttered the phrase for fear of people intruding during worship and theft, they now uttered it at the thought of one left standing outside—one whom they had learned to love. 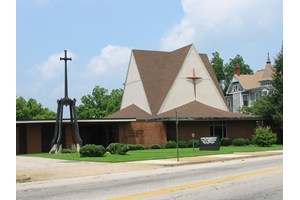 The leaders insisted to their pastor, Meredith, that she needed to find the man and get him to forgive the congregation for their oversight—Meredith agreed with them wholeheartedly. Of course, Meredith knew the gentleman very well because Ascension has been hosting a meal for us every month for well over a year now. Each month, we fill their fellowship hall with folks from all over town who are eager to eat a delicious meal and spend time with each other. In that blessed space, we gather our little beloved band of folks. Some are homeless and some have beautiful homes. Some are hungry and eager for the meal to begin, while others are better fed and okay to hang back and join the line more slowly. Most struggle with some kind of addiction, whether it is to alcohol, money, crack, or control. 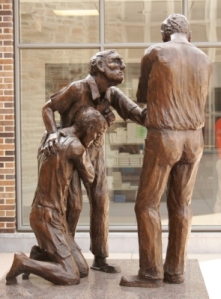 But, the fine folks in this lovely congregation have learned and are learning not just to provide a meal, but to provide their hearts in welcome hospitality to whoever may show up to God’s feast in their building. So when they unintentionally excluded their brother, many of them already had a relationship with him built over many dinners and conversations. So, at the insistent urging of her leaders, Meredith sought our brother out, apologized, and asked for his forgiveness. He was quick and eager to say that it wasn’t a problem and that he’d see them all again very soon.

You see, what was built over many meals cannot be shattered by one mistake. When God puts folks together, humility and forgiveness will keep them there by the Spirit.

Meredith likes to say that the meals they host and the partnership between Grace and Main, Ascension Lutheran, and Third Chance Ministries is something of a “little Pentecost” for her folks. “We’re learning how to speak and think about poverty,” she explained, “and it’s changing our people.” They, like we, are learning a new language full of “we” and “us” and not so much “them” and “other.” They, like we, are learning to say, “This can never happen again.” When we eat with a brother who has nowhere to lay his head, never again can we look the other way. When we break bread with a sister who has sold her body for a place to sleep or a bite to eat, never again can we say we’re not our sister’s keeper. When we share the cup with a child who has too little food at home, never again can we say that it’s somebody else’s problem.

Together, we’re all learning how to breathe a silent prayer to God—“May this never happen again”—and then join God in making it so.